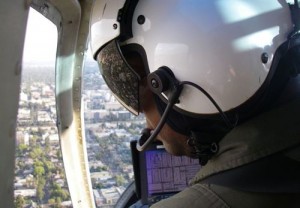 A San Gabriel man was arrested for allegedly pointing a laser at a police helicopter, injuring a Pasadena officer.

The incident happened Thursday at about 9 p.m. while the officer and the rest of the helicopter crew were flying over San Gabriel. Members of the crew were not wearing protective eyewear, and the Pasadena officer suffered an injury. The exact nature of the injury was not immediately disclosed.

After the laser strike, the helicopter crew worked with San Gabriel police to track down the culprit. Investigators found the suspect, identified as 23-year-old Rafael Juarez, and arrested him without incident.

The flight crew landed safely at the Pasadena Heliport and the injured officer was transported to an area hospital for evaluation.

When Juarez was arrested, officers found drugs on him – possibly cocaine. He was booked at the San Gabriel City Jail for discharging a laser at an aircraft and possession of a controlled substance.

Laser strike violations are prosecuted at the state and federal levels. The Federal Aviation Administration seeks civil penalties of up to $10,000 for each occurrence.