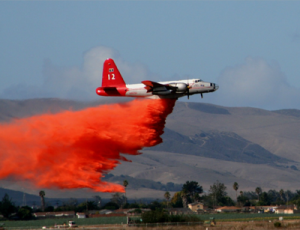 The pilots were fighting the 5,000-acre White Rock Fire, which began burning Friday night after a lightning strike in eastern Nevada. The fire spread across the Utah line Saturday night, but most of the blaze remained in Nevada, about 150 miles northeast of Las Vegas.

The cause of the 1:45 p.m. MDT crash in the Hamblin Valley area of western Utah was unknown, Bureau of Land Management officials said.

BLM ground crews and helicopter crew members worked for a time to hold the fire back from the wreckage. Sheriff’s deputies drove and hiked for more than an hour to reach the site and confirm that the pilots had died, Edwards said.

The pilots were flying a P-2V air tanker that is owned by Neptune Aviation Services of Missoula, Mont. The victims’ names weren’t immediately released. A medical examiner was helping authorities recover the bodies as of Sunday night.

The fire has been burning in steep, rugged terrain featuring pinion-juniper woodlands, sagebrush and grasses. Crews were pulled off the fire lines after the crash.

“To have them working on the fire lines after this is more than we would like to ask firefighters,” said Don Smurthwaite, spokesman for the National Interagency Fire Center in Boise, Idaho. “It’s obviously a horrifying and tragic event.”

Also Sunday afternoon, the crew of another firefighting P-2V air tanker reported it was unable to lower all of its landing gear and land at Minden-Tahoe Airport in western Nevada. That crew had been helping with efforts to fight a wildfire near the airport, which is about 50 miles south of Reno.

Crew members flew the plane for another 90 minutes to burn off fuel before making an emergency landing on a cleared runway, Douglas County sheriff’s spokesman Jim Halsey said.

The aircraft sustained significant damage after it slid off the runway, but both crew members escaped injury, he said.

Sunday’s incidents come several months after a group of Western senators questioned whether the Forest Service was moving quickly enough to build up and replace the fleet of aging planes that drop fire retardant on wildfires.

The agency hires a mix of large and small airplanes and helicopters each year to fight wildfires. They are generally privately owned and work under contract.

Retardant dropped from planes is typically used to bolster a line cut by firefighters on the edge of a fire, and water dropped from helicopters is usually used to cool hotspots within a fire.

The current fleet is made up of Lockheed P-2Vs, anti-submarine patrol planes dating to the 1950s that have been modified with jets to supplement the piston engines. More than half are due to retire in 10 years.

The number of large aircraft has steadily dwindled since 2004, when the Forest Service grounded 33 air tankers after a number of high-profile crashes.

In March, Sens. Ron Wyden, D-Ore.; Jeff Bingaman, D-N.M.; Lisa Murkowski, R-Alaska; and Dianne Feinstein, D-Calif., asked the Government Accountability Office to evaluate whether the Forest Service has done a good job of analyzing the types and numbers of aircraft needed, the cheapest way to get them, new technologies and where the planes will be based.