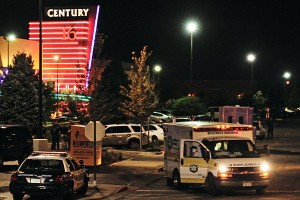 Much of the nation awoke on Friday morning to reports of the shootings in Aurora; the first reports were often as chaotic as the events in the theater.

According to local officials, at least 12 people were dead and dozens were injured in the shooting by the gunman, who wore body armor and a gas mask when he entered the movie theater in suburban Aurora, Colo., after midnight Friday. He then set off at least one canister of gas and opened fire with a variety of weapons. The attack came about half an hour into the showing of “The Dark Knight Rises,” an eagerly awaited summer epic that had fans lining up for hours.

The suspect was identified as James Holmes, 24, whose apartment on Paris Street in Aurora was being searched by officials. Aurora Police Chief Dan Oates said the apartment was booby-trapped with explosives, forcing authorities to evacuate five buildings along the street as a precaution.

The links below have dramatic audio from Aurora Colorado police and fire dispatch frequencies. When listening, fire communications are on the left channel, police comms are on the right channel. The feed archives for this incident were provided by Lindsay Blanton at RadioReference.com: