We’re Famous (or is that Infamous?) 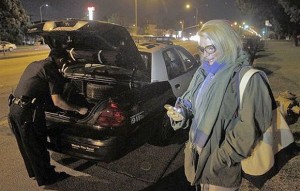 On the front page of the L.A. Times this morning is an article by reporter Weston Phippen about scanner listeners using Twitter to tell the world what’s going on around them when police and fire sirens are heard.  Or at least, expounding on the sometimes weird and wonderful stuff that they hear on their scanners.

Several SCMA Members were featured and quoted in the article and, in all, it gives a positive impression of us.

A growing group of L.A.-area residents share a passion for listening to police scanners and spreading that news online, in real time, via Twitter. ‘It’s like theater,’ one says.

On a recent night in Venice, late enough that the boardwalk is empty of tourists, a police officer questions a man in a black plaid shirt. A woman with surfer-blond hair pulled into a ponytail stands nearby, the sounds from a portable scanner escaping through her jacket pocket. She snaps a picture with her phone and attaches it to her tweet:

She is Venice311, otherwise known as Alex Thompson, part of a rapidly growing group of L.A.-area residents who share a passion for listening to police scanners and then disseminating that local news online, in real time, via Twitter.

Freeway accidents, arrests, fires, power outages, a man waving a machete on a roof — it all comes into play.

Thompson, 44, launched her Twitter feed and a website after realizing that despite 12 years of living in the area, she knew little about crime in her neighborhood.

“This came out last night,” she says, having recorded it off the scanner with her iPad.

“That’s … crazy,” she says and laughs. “That’s right down the street.”

That’s why she does this.

“The thing I can do with this scanner is let a lot of people know about the crime and inform them,” Thompson said. “Then people will understand what we have to do to make this place better.”

Listening to police scanners has long been a tool for late-night crime reporters and a hobby for homebodies, rarely seen or heard. But that has changed. Nearly a dozen prominent scanner enthusiasts in Los Angeles County now tweet to about 30,000 followers and often retweet each other.

Joe Fournier is a member of the Southern California Monitoring Assn., a support and information group for scanner followers. He sees the online explosion as a new wave of entertainment.

“It’s the same thing as the reality shows,” says Fournier, who bought his first scanner 40 years ago, when he was 10. “It’s live. It’s unscripted.”

Thompson has taken the live part to a new level. She shot and posted video of a woman caterwauling inside a beach bathroom, a needle and crack pipe near the doorjamb. She snapped pictures of officers responding to a man with a shotgun and then had to fight to get her camera back after the man’s mother grabbed it, fearing the scene would end up on the Internet. It did anyway.

These scanner fans informally divide up the county. Thompson focuses on the Westside and the Los Angeles Police Department‘s Pacific Division. The Culver City area falls to 19-year-old Billy Dunwoody, who tweets at Culvercity311 between classes at West Los Angeles College and at night.

The San Gabriel Valley is the domain of 51-year-old Joe Ortiz, otherwise known as sgvscanner, who typically squeezes in dozens of tweets a day, mostly at night. And, until his granddaughter needed it, Ortiz kept an entire room devoted to police scanners. Another gaining in popularity is a man in his mid-30s known as LAScanner, who has built a reputation for snarky tweets. He asked that his real name not be used, fearing a backlash at work. He listens to scanners, he says, almost like music — a way to decompress

“It’s like theater,” he says. “It’s a whole unfolding story.”

It’s also a never-ending story. A scanner is always awake, reporting police and fire calls — all told by a dispatcher’s voice as calm as a veteran fast-food worker repeating an order.

Thompson takes hers everywhere. While she sleeps, it chirps on her nightstand. When news breaks, she often jumps on her electric bike and speeds to the scene, snapping photos and taking video when she can because, as she puts it, people love “to see the train wreck.”

“There has never been a day that I’ve listened to the scanner and I was not completely astounded by the human condition,” she says.

After launching her Twitter feed in January of last year, Thompson quickly built a following that now numbers 8,257. Her tweets, the vast majority relating to scanner calls, total more than 22,000.

Attached is a picture of a cute snub-nosed sweeping machine on a Venice back street.

It’s also clear her followers have come to rely on her for crime alerts, as evidenced by Thompson’s reply to one plea for news:

Hey sorry took a nap! There was a burglary. House had an open door – airship helped as they looked for bad guys who were gone

The Southern California Monitoring Assn.’s motto says it all: “In God we trust — all others we monitor.” The club, whose roster lists nearly 100 names, professes to be the biggest west of the Mississippi. (The largest is the Chicago Area Radio Monitoring Assn., with more than 1,400 members.)

Khalil Ladjevardi, 59, the SCMA’s director, got his first scanner when he was 15.

“I think it’s mostly curiosity about the world around them,” he says of the people attracted to scanners. “Sometimes you may hear [police] looking for a suspect, and it may just be the person in front of you.”

A number of law enforcement and fire officials welcome the scanner enthusiasts.

Los Angeles County Sheriff’s Capt. Mike Parker, whose Twitter handle is mpLASD, is a department spokesman and tweets often, sometimes even sending discreet words of praise to those who help warn the public with tweets like this:

“One positive that has happened from scanner fans is that they have helped on many occasions to amplify a message,” Parker says.

His Los Angeles Fire Department counterpart is Brian Humphrey, an SCMA member. On its website, the LAFD refers to its own online scanner feed and appreciates the enthusiasts, he says, even though they sometimes send out false information or misunderstand the shorthand used.

“I don’t believe it’s dangerous, but it requires attention,” says Humphrey, who tweets on LAFDtalk. “It’s a little different than most hobbies.”

Indeed, the scanner’s language can be tricky at first.

She laughs recalling how she named her Twitter feed in honor of the city of L.A.’s information and non-emergency services hotline, 311, but later was told it’s also police code for indecent exposure.

“It was a happy accident,” says Thompson, who recently took her fledgling 311 brand to Koreatown and Hollywood. (Culver City’s Dunwoody got her OK to use 311 in his handle).

Thompson works from home running her own company retouching digital photos, which gives her freedom. “There’s never, ‘And you have your scanner?’ ” she says. “I always have it.”

In the morning, she says, she usually grabs her iPad before doing anything else and listens to the events logged overnight. Her Macbook, meanwhile, continuously uploads Pacific Division dispatch calls onto an online server.

Thompson, who’s never been married, has no children and counts other scanner fans among her friends, has come to terms with the fact that her hobby doesn’t allow much room for human relationships.

“Since I have the scanner going 24/7 even in bed, why introduce a guy into the equation and ruin a good thing?” she asks. “I am a really good listener though.”

One night recently, Thompson was fiddling with the volume control on her scanner. Not even a crackle.

A call finally came in before midnight. A couple strolling along the shore called police. As Thompson approached, Sgt. Daniel Gonzalez was stepping onto the sand, the spotlights from his patrol car and a second cruiser tunneling a white hole in the dark night, lighting up the perp.

The officer knew the grunion were running. Figuring the couple accidentally interrupted the mammal’s dinner, Gonzalez grabbed a grunion and tossed it to the sea lion. Then another.

Later Thompson posted the photos and ended with:

All but one grunion survived