The L.A. County Sheriff’s Department, working with Raytheon, recently outfitted 90 motorcycle officers with Panasonic CF 19 Toughbook laptop computers, which are smaller versions of the ruggedized devices found in first-responder vehicles across the country.

Indeed, the agency previously replaced the mobile data terminals in about 1000 patrol cars with Panasonic CS 31 laptops and decided that motorcycle officers needed a similar capability. While these officers have been able to execute wants and warrants checks over their two-way radios, they now will be able to leverage DMV and criminal justice databases, receive mug shots, DMV photos and incident video, and receive vital alerts, according to Capt. Mike Parker, who said that officer safety was a key driver for the initiative.

“When a BOLO [be on the lookout for] goes out for a murder suspect in your area, the motor deputy [previously] wouldn’t know what he looks like — the patrol guys do, because they can get access to photos,” Parker said. “Now the motorcycle officer can get the same information as the patrol officer — here’s a picture of the car, here’s a picture of the guy that we’re looking for.”

Efficiency also was a key driver, said Capt. Scott Edson, who heads the department’s communications and fleet-management bureau. Prior to receiving the laptops, officers had to return to the station to file reports and update logs. Now, those activities can be done from the field, which keeps officers on the streets, where they are most needed. 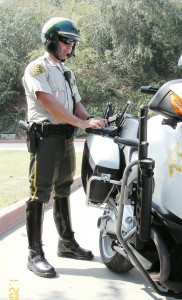 “They are out there for the purpose of issuing citations to traffic violators, so that they can reduce traffic collisions and save lives,” Edson said. “Every time they have to come back into the station to catch up on paperwork, that’s just time wasted.”

There also is a safety component to increasing the amount of time officers are in the field, Parker said.

“Those deputies are now closer to other deputies who might need backup,” Parker said. “They no longer have to go back to the station for two hours to do paperwork.”

The laptops stay in lockable saddle bags until the motorcycle officers need them, according to Parker, who added that there’s no need to worry about officers texting while riding.

“We haven’t hired any three-armed deputies,” Parker joked. “You have to hold one handle for the brake and the other for the gas, so I don’t know how you would do that anyway. We haven’t been doing any recruiting in the octopus realm.”

The laptops operate on AT&T’s 3G network, which leverages HSPDA+ technology to provide sufficient bandwidth and capacity to satisfy the department’s data needs, Endus said. Although 4G provides a “much wider pipe and is much faster,” the department likely won’t upgrade, said Mike Bostic, West Coast director of Raytheon’s civil communications solutions group, which served as the systems integrator for the upgrade. 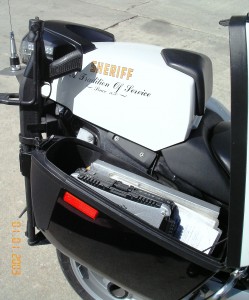 “When public safety’s broadband LTE network is built, if the governance works out right — and I know that’s a big ‘if,’ because it’s always about governance, it’s never about technology — then any agency should be able to write any app that they need, and that’s the way it should be,” Bostic said.

Edson agreed, even though he acknowledged that the commercial operators eventually will shut down their 3G networks because of the desire to migrate customers to pricier 4G connectivity.

“I don’t see us ever going to commercial-carrier broadband LTE,” he said. “The trend is that [consumers] are leaving the 3G-plus network and going to the 4G LTE network, so that’s leaving much more 3G-plus spectrum available, so we’re not competing for those resources — that works out better for us.

“And, in the next few years, when we would consider going to 4G based on our needs … the public-safety broadband network is going to be built out.”