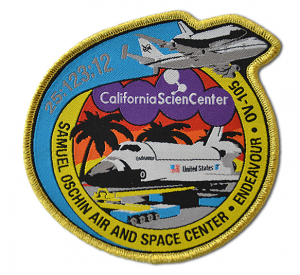 Space shuttle Endeavour will depart this weekend on a road trip from Los Angeles International Airport (LAX) to its new exhibition at the California Science Center (CSC). The two-day, 12-mile journey follows Endeavour’s arrival in L.A. atop a jumbo jet last month.

Endeavour will travel through Inglewood and Los Angeles, including passing over the 405 freeway, and pausing for celebrations outside the Forum and at a street intersection where “Fame” actress Debbie Allen has choreographed a tribute.

The move, which will begin hours before dawn on Friday morning, October 12,  and end after nightfall on Saturday has been dubbed “Mission 26: The Big Endeavour.” While it was in service to NASA, Endeavour flew 25 missions to space between 1992 and 2011.

Endeavour will make the journey atop a modified NASA overland transporter, driven most of the time by four self-powered, computer-controlled vehicles. For a brief stretch though, the shuttle will be towed by a stock Toyota Tundra pickup truck.

Despite being initially promoted by Los Angeles Mayor Antonio Villaraigosa as the “mother of all parades,” this week, officials clamped down on security and significantly reduced public access to the shuttle route.

“If it was up to the people moving the Endeavour, they would have the streets absolutely empty,” LAPD Lt. Andy Neiman said. “Because of the safety and security and just logistically, it would be much easier to move this without having to worry about crowd movement, crowd management.” 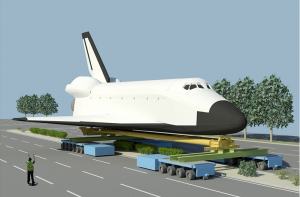 Los Angeles Police Sgt. Rudy Lopez said the massive spacecraft, with a 78-foot wingspan and a 58-foot-tall tail, needs the entire width of the roadways to squeeze through.  At some places along the route, the shuttle will be right at the curb, leaving little room for spectators. The shuttle’s route requires numerous turns, raising concerns that people on the streets could be hurt with even a minor miscalculation.  There are also worries about the shuttle sustaining damage during the move.

In response to security and safety concerns the Los Angeles Police Department announced this week it would close off most sidewalks along the way, making it difficult, if not impossible, for the public to see the shuttle go by.  Residents will be able to watch from their private lawns, inside businesses and along side streets, but it will by no means be a conventional parade. The sidewalks and streets will be closed about a mile ahead of and behind Endeavour as it crawls along the 12-mile route at no more than 2 mph to its new home in Exposition Park. Much of the move, including the beginning, will take place overnight.

And police will be out enforcing the rules. LAPD officials said officers on motorcycles and bicycles would accompany the shuttle and barricade public sidewalks, and helicopters would hover overhead.

“We don’t want to tell people to stay away,” Neiman said. “But what we want to do is encourage them to go to one of these viewing areas or wait until the shuttle is at the Science Center.” 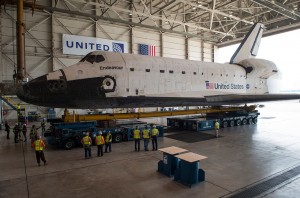 Some South L.A. residents feel double-crossed. To make way for the shuttle, hundreds of old-growth trees were cut down, some more than 60 years old, radically changing the look of some streets. Residents are also going to have to deal with serious traffic delays during the move as major streets such as Manchester, Crenshaw and Martin Luther King Jr. boulevards are periodically shut down.

Still, tens of thousands of residents and visitors are expected turn out to witness Endeavour’s slow trek to its new home.

Endeavour is scheduled to depart LAX airport property at around 2 a.m. Friday (Oct. 11). The first day of the move will be punctuated by short drives and long stops as crews work to raise power lines between the airport and the overpass that the shuttle will cross over the freeway.

Endeavour will take Westchester Boulevard to Sepulveda, where it will make its first extended stop for about nine hours in a parking lot as the first set of transformer lines are de-energized and raised. That afternoon, Endeavour will continue down Manchester Boulevard, crossing into Inglewood and stopping for another six hours as its path is cleared.

Out of safety concerns involving the power line work, Los Angeles and Inglewood police departments have said that public viewing will be limited on Friday until Endeavour’s overnight crossing of the 405 is completed.

Originally, the plan was for Toyota to lend one of its stock Tundra trucks to tow the shuttle on its last quarter-mile to the science center. Instead, the pickup will be used to move Endeavour over the freeway due to its computer-driven transporters not being cleared for use on the overpass.

By Saturday morning at around 8 a.m., Endeavour should be passing by Inglewood City Hall, where it was initially expected to stop. The city hall grounds should still offer plenty of opportunities for the public to see the shuttle on the move, but it will continue on its way to The Forum for a ceremony that will ‘launch’ Endeavour’s final journey.

The Inglewood Police Department said it is expecting between 10,000 and 14,000 people to attend the event at the arena.

Leaving The Forum celebration, Endeavour will head back into Los Angeles and pause again at Crenshaw Boulevard and Martin Luther King, Jr. Boulevard for the Debbie Allen production at around 2 p.m. The intersection will be able to accommodate only about 1,500 spectators, according to the LAPD.  Organizers are already cutting back on publicity for the event because of fears of overcrowding.

Endeavour will then roll along King to Bill Robertson Lane and then turn left into Exposition Park on the final stretch to the California Science Center’s Samuel Oschin Space Shuttle Display Pavilion.

The arrival at the CSC, which is expected around 9 p.m. PDT, may provide the best opportunity for the public to see the Endeavour during its road trip. The center plans to debut Endeavour to the public on October 30th.

According to the LAPD, extremely large crowds from all over Southern California are anticipated to show up in an attempt to see the shuttle in its final miles through the streets. Due to the road closures and limited parking, the police have cautioned that this influx will likely result in significant traffic congestion and long delays in and out of the area. 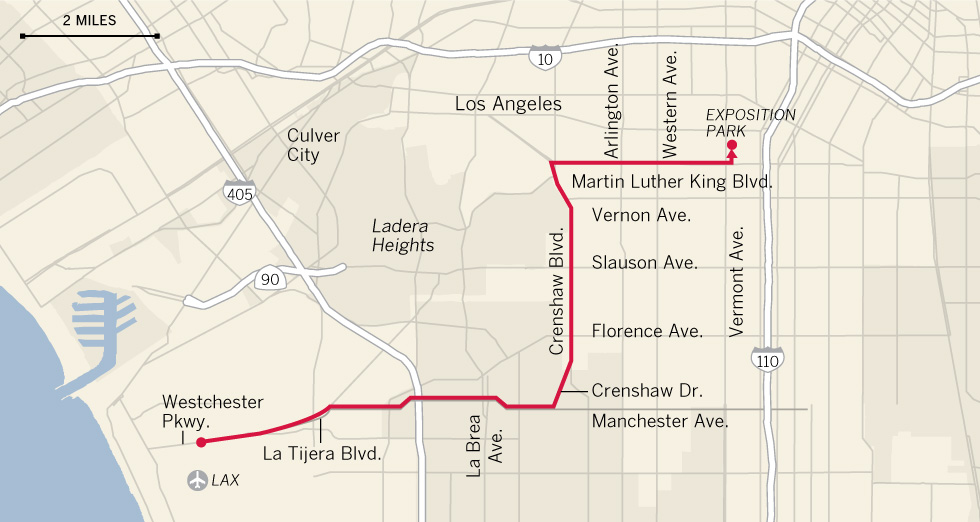