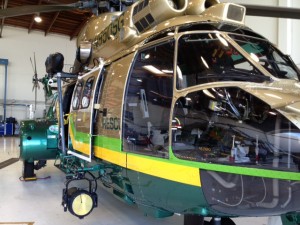 With parts and support for the three H-3’s becoming more expensive and difficult to obtain, the decision was made to replace them. The three AS 332L1’s that LASD is obtaining will continue the long tradition of the Department’s Air Rescue-5 program.

Air Rescue-5, the rescue unit of the Aero Bureau, commenced operations in 1955 with the Department’s first helicopter, a Bell 47. This ushered the Department into the helicopter age and resulted in L.A.S.D. becoming one of the first law enforcement organizations on the west coast to incorporate helicopters into use.

In the 1970’s, the piston-engine Sikorsky H-34 (military S-58) helicopters were acquired, followed by turbine-powered, Sikorsky S-58T’s. The Department acquired the H-3’s in 1998. In each case where the Department secured a newer model helicopter, we also benefited from additional capability, power, and function.

The arrival of the Super Pumas again establishes the Department as a leader in law enforcement aviation and helicopter operations.

The Super Pumas will provide a power and capability increase over the outgoing H-3’s, which will be especially valuable in the high-altitude mountains around Los Angeles County, and will increase the overall safety and capabilities of Air Rescue-5.

Once delivered, the three AS 332L1’s will be upgraded for the Aero Bureau’s missions with external hoists, nose-mounted forward-looking infrared cameras (another first on a Department rescue helicopter), night-vision compatible cockpits, multi-patient medical interiors, and various other airframe modifications specific to the Aero Bureau’s requirements.

“The Super Pumas are equipped with advanced technological enhancements that will enable the Air Rescue 5 personnel to maintain the highest operational capability and the ability to fly in nearly all weather conditions,” said Sheriff Baca.

Additionally, the Super Pumas will be equipped with an advanced avionics cockpit. These enhancements include Global Positioning System / Wide Area Augmentation System (GPS/WAAS) navigation capability, instrument flight rules (IFR) capability, and weather RADAR. LASD Super Pumas and flight crews will be capable of flight in nearly all weather conditions, enabling a trauma patient on board to reach a hospital emergency room when all other less capably equipped helicopters will be stuck on the ground. 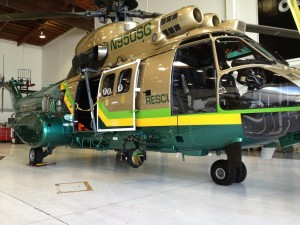 For enhanced safety, LASD Super Pumas will be equipped with Enhanced Ground Proximity Warning System / Terrain Awareness and Warning System (EGPWS/TAWS), and a program Flight Operational Quality Assurance (FOQA) program. These enhancements bring the Super Pumas and the Air Rescue-5 program in alignment with some of the highest industry standards for flight safety and operational capability.

Although primarily tasked as rescue aircraft, other missions expected of the Super Pumas will include SWAT insertions and extractions, homeland security support, maritime interdiction and personnel transport after natural disasters, such as earthquakes, floods, and fires. Other missions may include over-water rescues and transports to the Catalina and San Clemente islands, which lie within the jurisdiction of Los Angeles County.

The AS 332L1 Super Puma is a proven performer. It is about 25% smaller in size to the venerable SH-3H Sea King it replaces, but it can carry the same number of people, is more powerful, faster, and more capable than the Sea King could ever be.

This will equate to nearly a 30% faster response time, which translates to faster arrivals to hospitals for patients needing care. This additional speed and all-weather capability brought to bear against the “Golden Hour” for trauma patients will undoubtedly save lives. “We are looking forward to the enhanced mission capabilities of the Super Puma helicopter as it relates to our specific LASD law enforcement role and rescue missions. These helicopters are all-weather aircraft, which will allow us to safely deliver our patients more expeditiously to the hospital within the golden hour. The aircraft will also prove itself instrumental, both in rescues and as logistical support in major catastrophic events, such as earthquakes, fire, or a terrorist-related incident,” said Aero Bureau Captain Louis Duran.

Beginning with the introduction of the Puma model in 1963, including all of the variants to date, there are over 700 aircraft in service worldwide, having logged over 6 million flight hours. The residents of the County of Los Angeles will continue to be served, this time with a modern, solid aircraft with its respective share of aviation tenure and experience.