POTUS Back in LA for Fundraisers October 7th and 8th 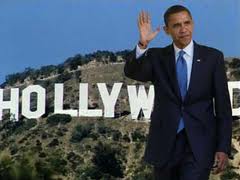 There should be plenty of opportunities to monitor the local CHP, police, fire and military frequencies during some “special events” this weekend.

President Barack Obama will be back in Los Angeles on Sunday, October 7th and Monday, October 8th. The President is looking to get donations (again) from Hollywood stars and supporters.

From a press release:

“The Wake Up America! 2012 Rally provides a platform for all citizens to stand up for the founding principles that made this country great: constitutionally limited government, individual opportunity, liberty, American exceptionalism, and free enterprise. With Obama in Los Angeles for a fundraiser at the very same time as the Wake Up America! 2012 Rally, this event will send a message to Obama and the rest of America that Obama’s policies have not only strayed from our founding principles but have failed our country.”

The President’s publicly posted schedule (which is always subject to change):

Obama will fly into LAX on Sunday and will be attending a fund-raising concert at the Nokia Theater. Billed as the 30 Days to Victory Concert, it will feature performances by Jon Bon Jovi, Jennifer Hudson, Stevie Wonder, Katy Perry and Earth, Wind & Fire.  On Sunday night, DreamWorks Animation CEO Jeffrey Katzenberg will co-host a $25,000 per person after concert dinner at Wolfgang Puck’s Bar and Grill at LA Live.

Obama will stay in LA overnight and, on Monday morning, will motorcade to the Pacific Palisades home of producer Michael King (whose family ran King World Productions) for a breakfast fundraiser.  Former President Bill Clinton and San Antoino Mayor Julian Castro will co-host.

The POTUS is expected to leave Los Angeles as Air Force One departs LAX for a short flight to San Francisco Monday and more fundraising there.

Possible Frequencies to Monitor — * Have Been Active in Past POTUS Visits: