Los Angeles Firefighters dramatically rescued a family and their pet dog from fierce flames, when fire erupted after business hours Wednesday evening in an automotive upholstery business, where the family apparently resided.

The Los Angeles Fire Department was notified at 6:21 PM on Wednesday, December 31, 2014 of a structure fire at 6015 South Broadway Street in South Los Angeles. Firefighters arrived quickly to find heavy fire to the rear of a well secured 4,600 square foot, combination one- and two-story upholstery firm, with reports of four persons trapped within the rear of the burning building. 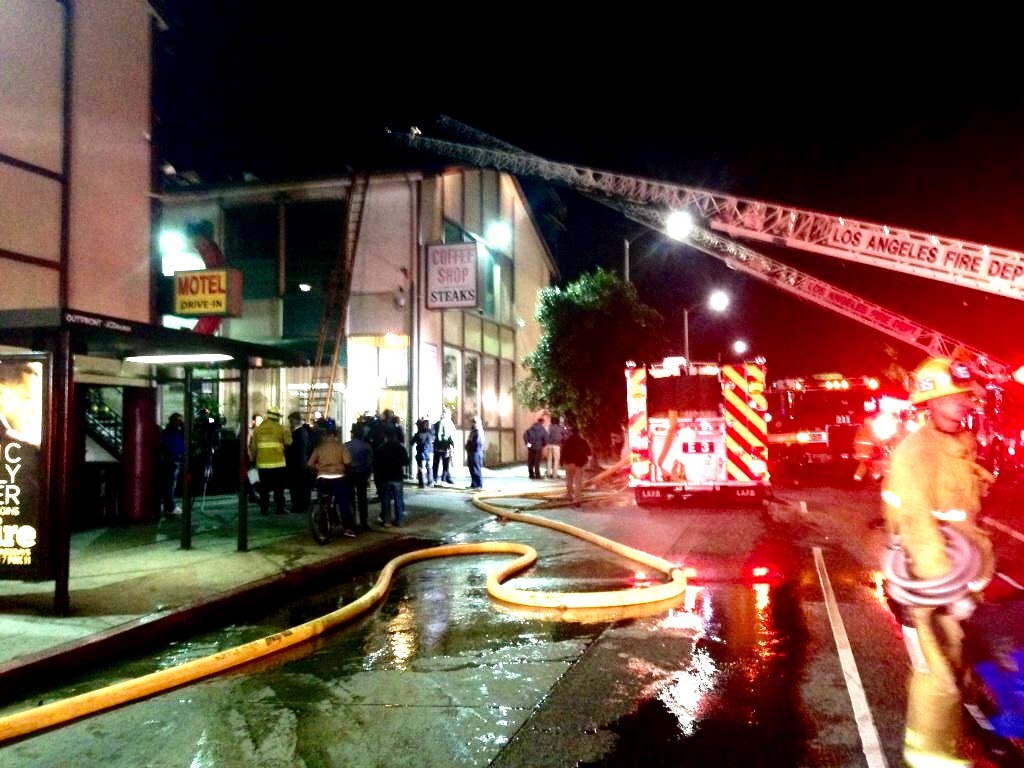 Despite limited access and structural compromise of the unreinforced masonry building by
fast-moving flames that soon extended through the roof, teams of firefighters navigated swiftly among downed power lines to the rear of the building, to extend ground ladders to mezzanine windows, where the family of four was reportedly trapped. Using power saws and hand tools atop the ladders – as their colleagues pushed back flames with hoselines, firefighters deftly removed window bars on the upper level, and assisted the four trapped persons and dog from the inferno.

The man, woman, child and toddler – all suffering smoke inhalation, were taken to a nearby hospital by LAFD paramedic ambulance. Preliminary information described one of the children as being in serious to critical condition, with the remaining family members in fair condition. The small dog, which appeared uninjured, was placed into the care of the Department of Animal Services.

One hundred sixteen firefighters under the command of Assistant Chief Donald Frazeur confined flames within the upholstery business, preventing fire from damaging a karate studio to the north or a church to the south. The fire was extinguished in just 31 minutes.

Due to fire damage, the presence of smoke alarms and their functional status at the time of the blaze could not be immediately determined. The 93 year-old building was not equipped with fire sprinklers. The Department of Building & Safety was summoned to evaluate the integrity of the heavily damaged structure, as well as to determine if the building was appropriately serving as a domicile.

Fire loss to Fernando’s Upholstery is still being tabulated. The cause of the greater alarm fire remains under active investigation.

Thanks to Rick, WA6KFI LA-101 for alerting fellow club members about this incident via the club repeater.