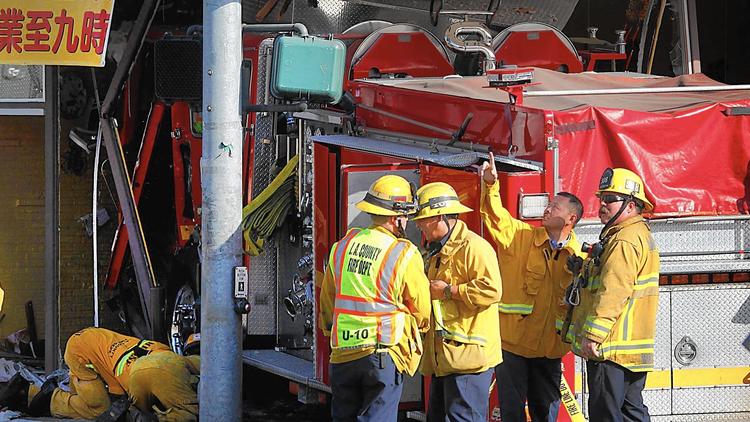 After the 9/11 terrorist attacks, local governments began talking about a new emergency communications plan that would connect every cop and firefighter in Los Angeles County on one system.

But to the dismay of many, the radio network is still not a reality. For the last six years, officials have weathered delays caused by technological hurdles, contracting issues and shifting requirements from the federal government.

As a Sept. 30 deadline looms for completing a major part of the work, new issues are threatening to undermine the effort.

Groups of firefighters and residents are planning to pack Tuesday’s L.A. County Board of Supervisors meeting to protest the placement of giant cell towers needed to connect the agencies. Some cities have dropped out of the project, arguing they don’t need the network and don’t want to pay the costs.

Backers are now trying to get the radio system on track.

“Public safety is No. 1 here, and I would hate to see this fall apart,” said Supervisor Don Knabe, who from the early days embraced the project, as did his board colleagues, public safety officials and most of the county’s 88 cities. “I hope we can do a better job of outreach and move forward.”

But if the project loses too many cities and can’t build an adequate number of towers, he said, “the whole system could very well go away…. It would not be affordable or workable.”

Supervisors on Tuesday will be asked to authorize negotiations for more cell towers and will get an update on the project, known as the Los Angeles Regional Interoperable Communications System, or LA-RICS.

After 9/11, the federal government urged authorities in large metropolitan areas to build emergency communications systems that would allow separate agencies to work together quickly and efficiently, and it offered grants to help pay for them. The LA-RICS Authority decided to build two separate public-safety communications systems — a Long-Term Evolution for transmitting data and a Land Mobile Radio to allow first responders in a disaster to talk with one another.

The authority received a $154-million grant to pay for 80% of the Long-Term Evolution data building costs, with the rest coming from the local participants. The radio part, now in the planning phase, is anticipated to cost about $250 million, with federal grants expected to pay for most of it; completion is projected for 2018. It would replace the roughly 40 radio systems now operated by public-safety agencies throughout the county and allow them to easily switch to new frequencies set to be available in 2021.

If the data system isn’t completed by the end of September, local officials will have to return any unspent federal money. To help keep to its schedule, the authority decided to build its cell towers on publicly owned sites, including county fire stations, and got them exempted from state environmental review requirements.

But the firefighter union contended that the towers’ radio frequency emissions would pose health hazards to them and neighboring residents. And community activists got angry when they saw the towers — some with monopoles as high as 70 feet — going up without notice. Some cities refused to allow the towers, reducing their planned numbers from 232 to 177.

County officials say the firefighters’ health concerns are groundless, noting that the emissions are well below Federal Communications Commission standards and less than what are given off by cordless phones and baby monitors. They have cited research by a widely respected expert and statements from such organizations as the American Cancer Society.

The union cites other research and has enlisted neighbors via social media and mailers to fill out protest cards to send to the county Hall of Administration.

“We told them the supervisors are the only ones who can stop this thing,” said Lew Currier, a director of the Los Angeles County Firefighters Local 1014.

Supervisor Michael D. Antonovich recently ordered a halt to tower construction at a Saugus fire station until neighbors can have their questions answered.
“While a reliable communications platform … is vital to preserve life and property during times of natural or made-made disasters,” Antonovich said in statement, “our employees and residents need to be assured that there are no health risks, and adequate notification should be made on planned cell towers.”

Supervisor Hilda Solis said she takes firefighters’ and residents’ health concerns “very seriously,” and Supervisor Mark Ridley-Thomas questioned why “some of these issues were not anticipated, if not resolved.”

Besides objections to the towers, officials must grapple with the consequences of 12 cities dropping out of the project, with others possibly following suit before a Nov. 23 “opt out” deadline. Some have operating cost concerns or are participating in another communications system.

Reggie Harrison, director of disaster preparedness and emergency communications for Long Beach, said city officials balked at the estimated $1.3 million they would be assessed annually. (Costs are based on a city’s population and geographic size.)

“We’re extremely supportive of RICS, and if those numbers change, we could very well find ourselves back at the table,” Harrison said, adding that the city has decided it can make do with its current communications system in the meantime.

Patrick J. Mallon, executive director of the LA-RICS Authority, believes it can address the cities’ cost concerns by coming up with a new pricing formula. He is hoping to calm neighbors’ worries over aesthetics and property values by making towers look like trees or hiding them in fire station structures used to dry hoses, for example.

Even so, the authority “will be hard-pressed” to meet the fall deadline, Mallon said.