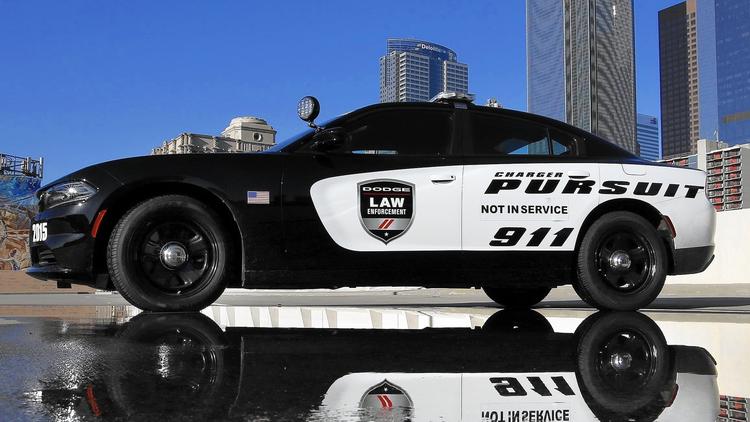 Fleet sales are an important part of U.S. automakers’ bottom lines, and none have more cachet or higher visibility than a contract with a law enforcement agency.

In addition to producing a reliable source of revenue, being chosen by a high-profile police department is a badge of honor. Putting officers in their cars gives Ford, Chevrolet and Dodge an advertising boost.

“This is absolutely a good marketing opportunity for us,” said Jonathan Honeycutt, marketing manager for Ford’s police vehicles. “This is a division we want to be in.”

Ford sold law enforcement agencies about 20,000 units of its Interceptor Utility, which is based on its popular Explorer sport utility vehicle, and 10,000 police-issue Taurus full-size sedans in 2014, Honeycutt said.

Those are good sales. Although Ford would not comment on how much it charges for either vehicle, the California Highway Patrol paid just under $30,000 for each of the 1,024 Interceptors it bought over the last three years, CHP Capt. Steve Mills said.

Dodge is similarly hesitant to disclose prices on its popular police vehicles. But the company does claim to build the country’s bestselling police sedan, having sold more than 10,000 units of its Charger Pursuit in 2014.

“You hate to see a Charger Pursuit grille in your rearview mirror,” he said. “But we think there’s a lot of carry-over in terms of the macho appeal of the vehicle.”

The Dodge Charger is the second-most-popular sedan that parent company Fiat Chrysler Automobiles sells. Ford’s Explorer is one of the most popular SUVs on the market.

The vehicles based on them, along with Ford’s Taurus and Chevrolet’s Caprice and Impala sedans, are the leading choices for agencies signing contracts for law enforcement vehicles.

Indeed, in early 2013, according to published reports, the Los Angeles Police Department ordered 100 of the Chargers, 50 Interceptors, and 38 Ford sedans, to replace vehicles aging out of its massive fleet.

The Interceptor Utility is effectively a beefed up Ford Explorer, while the Dodge Charger Pursuit is based on the refreshed 2015 Charger that is rolling into dealerships.

On the road, both police-issue models handle and accelerate eagerly, partly the result of upgrades that fortify them for police duties.

Both the Interceptor and the Charger Pursuit are equipped with radiator and engine and transmission oil coolers designed to withstand long high-speed chases. The heavy-duty brakes are built to withstand high heat. The suspension systems are reinforced and stiffened for better handling.

The Dodge is outfitted with a cooling fan in the trunk, not to keep criminals on ice but to cool the vehicle’s electronic equipment.

The Dodge also comes with a self-leveling rear suspension and enough clearance to chase drivers across highway medians or into rough terrain.

The Ford has been tested for 75-mph rear-impact crashes, a far higher threshold than production cars. The front doors are bulletproof and can withstand shots from a high-powered rifle. There are even steel plates built into the seat backs separating police officers from their rear passengers.

The Dodge Pursuit also comes with a choice of two engines.

Although production versions of the Charger now have an eight-speed automatic transmission, the police models have an old-school, heavy-duty five-speed automatic.

In addition to mechanical upgrades, the Dodge and the Ford both carry a considerable amount of specialized gear, which drives the total cost of the police vehicles to about double their manufacturers’ sticker prices.

The typical CHP cruiser, Mills said, costs just over $40,000, which buys a skid plate, a “push bumper” on the front of the vehicle, a touch-screen onboard computer system, antennas, storage for weapons, and other police prerequisites.

That price doesn’t include an additional $24,000 for a specialized communication system that since the terrorist attacks in September 2001 has been recommended by the FBI and Department of Homeland Security for all U.S. police vehicles.

The system adds 250 pounds to the total weight of the vehicle. That’s one reason police agencies have abandoned the popular Ford Crown Victoria. Ford discontinued the civilian version in 2011, and now the iconic V-8 cruiser is gradually being phased out of law enforcement fleets because it is not capable of carrying the additional weight.

Not everything on every vehicle is new. Items like the light bars are recycled from previous vehicles, as they are decommissioned from the fleet and sold. Some of the CHP’s sirens have been around since the 1970s, Mills said.

The Michigan State Police and the Los Angeles County Sheriff’s Department each conduct an annual series of police vehicle tests and publish the results so that other police agencies may benefit.

In its test of 2014 vehicles, the Michigan agency found the Ford Interceptor was the fastest of 12 models to reach 100 mph; the Dodge Charger with the Hemi V-8 was the fastest around the test track; and the Chevy Caprice had, at 155 mph, the top speed.

The CHP, nearing the end of a three-year contract with Ford for the exclusive use of its vehicles, conducts its own tests but does not publish the results.

There’s no doubt the Charger Pursuit and the Interceptor are both more able vehicles than the old Crown Vic — with more power and better handling but using less fuel.

But as his agency makes the transition from the Crown Vic to the newer vehicles, Mills said, there’s still a lingering nostalgia for the older, more familiar Fords.

“In a world where everything changes every day, police officers absolutely look for things to stay the same,” he said. “It’s hard to say goodbye to an old friend.”