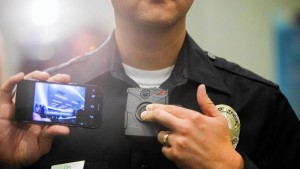 After nearly two years of fundraising, testing and negotiating policy, Monday’s rollout marks a significant moment for the police department’s long-awaited body camera program. The city plans to purchase and deploy more than 7,000 devices in the coming months, making it the largest in the country to use the cameras on a wide scale.

The first batch of cameras — 860 devices purchased with about $1.5 million in private donations — will be given to officers within the next month, the LAPD’s chief information officer told the Police Commission on Tuesday.

Officers working the LAPD’s Mission Division — which covers San Fernando Valley cities including Sylmar and Panorama City — will get their cameras on Monday, Maggie Goodrich told the commission. Officers assigned to South L.A.’s Newton Division will start using the cameras in mid-September, followed by those working specialized units, such as Central Division traffic and SWAT.

Police use of body cameras has drawn significant attention in recent months amid a heated national debate about policing. Advocates say the cameras will help bring clarity to controversial officer-civilian encounters, guard against officer misconduct and help clear those falsely accused of wrongdoing.

But concerns continue to linger over the LAPD’s use of the new technology, particularly over who will get to see the videos and when.

The LAPD policy — approved by the Police Commission’s 3-1 vote in April — allows officers to review the footage before writing reports or giving statements to internal investigators. But the LAPD has said it does not plan on publicly releasing the recordings unless they are part of a criminal or civil court proceeding.

Critics, including the Southern California chapter of the American Civil Liberties Union, said that giving officers but not the public a chance to look at the footage undermined the accountability that the cameras are intended to bring.

The ACLU reiterated its stance Monday in a letter sent to the Police Commission, in which the organization said it still opposed the use of the cameras under the approved policy because it “undercut public trust that the cameras should be building.”

Police Commissioner Robert Saltzman expressed similar concerns at Tuesday’s meeting. Saltzman, who voted against the policy this spring, peppered department officials with questions over when officers would get to see the footage and why the public wouldn’t be able to.

“The combination of those two policies, to me, is quite problematic,” he said.

At the end of the hearing, however, Saltzman said that although he had questions over the policy, he believed the cameras were “a great idea.”