On Thursday, September 3, U.S. Marine Corps F/A-18 aircraft will be arriving at Long Beach Airport (LGB). The aircraft are scheduled to arrive at 2:00 p.m. and conduct daily operations throughout the Labor Day weekend. They are scheduled to depart on Monday, September 7 at 4:00 p.m. All times are tentative and subject to change. 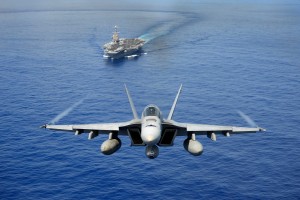 The U.S. Marine Corps has consistently demonstrated a desire to assist LGB in being a good neighbor. The F/A 18 aircraft operations will be restricted to daytime hours.

F/A 18 aircraft are noticeably louder than other aircraft and are easily heard in neighborhoods near Long Beach Airport. The aircraft will utilize noise abatement procedures when operating in the vicinity of Long Beach, including modified arrival and departure flight profiles and minimum use of afterburners.

If you’d like to meet the pilots, they will be hosting a meet and greet on Saturday, September 5 from 2:00 to 4:00 p.m. at Signature Flight Support, 3333 East Spring Street.

This news release came from the Long Beach city government, which operates Long Beach Airport.  Most airports are required to let U.S. government airport aircraft use the airport for no charge, as a condition of the airport’s accepting federal aviation funding.