LAFD arrived on scene to find a three-story building at 11869 Teale Street with fire showing on the third floor of an occupied business known as Innovation-Line, a supplier of Promotional Products. Additional firefighters were quickly requested. 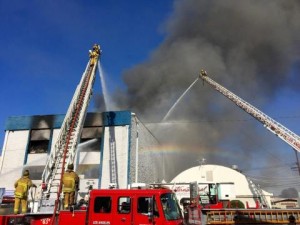 Flames rapidly spread from the third floor to the attic above and the second floor below. Firefighters worked aggressively to battle the intense flames under very hot conditions and worked to ventilate the structure. However, the conditions rapidly deteriorated until it was unsafe to have firefighters inside.

The Incident Commander radioed for all firefighters to exit the building and fight defensively. Firefighters swiftly deployed large diameter hand lines and ladder pipes from aerial ladder trucks to keep the fire in check and ensured no nearby structures were damaged.

Approximately 100 firefighters, under the command of Deputy Chief Joseph Castro, extinguished the flames in just under two hours.

The department of Building and Safety assessed the structure and determined the first and second floor were structurally sound and not compromised, thus allowing firefighters to safely make entry once again and extinguish hot spots through the mass of smoldering debris.

No one was injured. The LAFD Arson Section is investigating the fire cause and the estimated dollar loss is being tabulated.