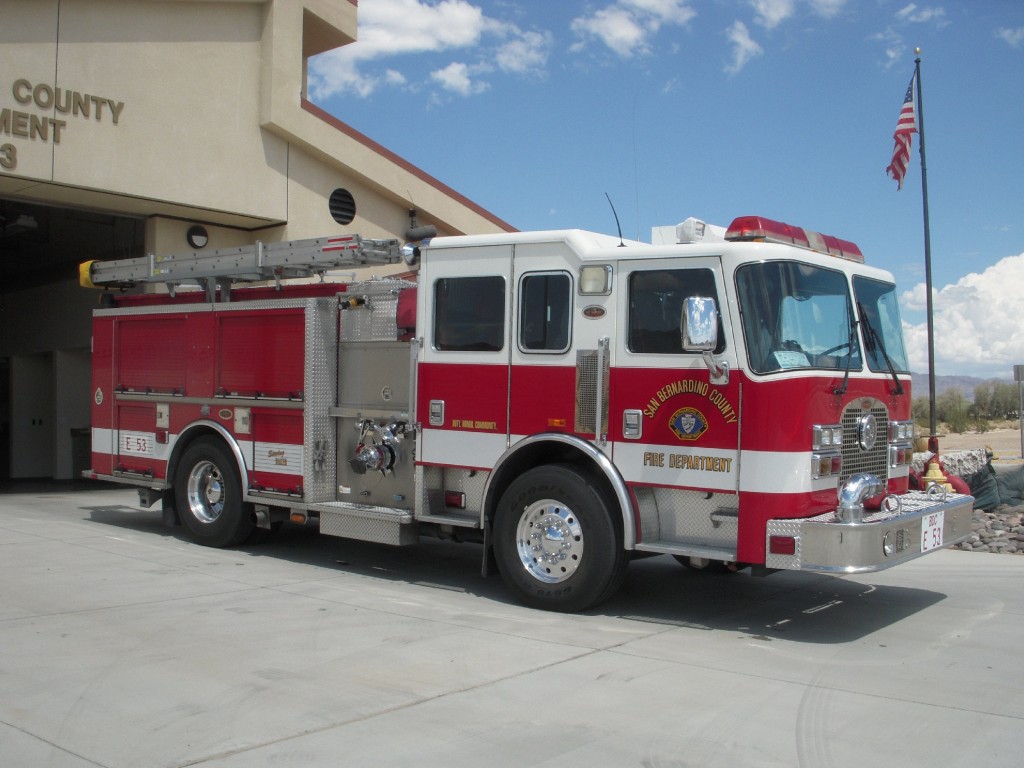 According to Caltrans, an average of just under 40,000 vehicles passed through Baker on Interstate 15 on a daily basis in 2014. That same year, statistics showed that some 23.5 million motorists traveled to Las Vegas. The vast majority were Southern California motorists using I-15.

It’s those numbers that concern Bill Mahan, one of three captains assigned at the San Bernardino County Fire Department’s Station 53 in Baker. That’s because the station is staffed only by one captain and one firefighter per shift. Mahan is lobbying his superiors to increase staffing at the station so there would be three fire personnel per shift.

“On a shift we have one captain and usually a limited-term firefighter, who has little to no prior experience,” Mahan said. “Normally a fire engine has an engineer, the person who drives and operates the water pump. We don’t have that here. So that falls on the captain or if their firefighter is qualified then he can do it.

“Say we are on a fire call I have my firefighter man the hose line as I’m talking to dispatch on the radio, managing resources, coordinating with CHP and running the water pump and making sure we don’t run out of water. It’s not a matter of things don’t get done, it’s just that things don’t get accomplished as quickly as we would like. It’s worrisome because lives are (in the) balance oftentimes. But our department is working on getting us additional staffing.”

The small town of Baker has a population of 735 people, according to census data from 2010, but its fire station is responsible for 4,000 square miles, including the stretch of I-15 that runs north of Baker and up to stateline, Highway 127 up to the Dumont Dunes, the Mojave National Preserve and portions of Interstate 40. The Baker station responds to approximately 1,500 calls annually.

Statistics from the Barstow area California Highway Patrol support the challenges the fire station faces with only two firefighters on duty per shift.

According to CHP spokesman Ryan Camara, officers responded to 371 property damage collisions, 148 collisions with injuries and 16 fatal collisions on I-15 between Minneola Road and stateline in 2015.

So far this year, officers have responded to 101 property damage collisions, 69 injury collisions and four fatals, he said.

Camara said he couldn’t say if Station 53 responded to each of those collisions, but it’s safe to assume they handled many of them.

“We have the equivalent of a large city’s population traveling through Baker on a daily basis,” Mahan said. “Granted they are all moving, but they are people traversing through my area that may need our service at the drop of a hat. Most cities responsible for a population of that size operate with at least three fire stations, with an engine of a captain, engineer and firefighter/paramedic.

“Normally when an engine needs additional resources, help is there within 10 minutes or less. We don’t have that luxury out here in Baker.”

That’s the other issue that Station 53 faces. If additional resources are requested, Mahan estimates the response time for another engine is 45 minutes “at best.”

Depending on the location of an incident, the station could request response from the county’s Helendale fire station, the Fire Department out of Marine Corps Logistics Base, Barstow or even the Clark County Fire Department in Nevada, as part of mutual aid agreements.

The agreement allows both fire agencies to assist each other in the Barstow area at no cost to either agency.

As part of the agreement, it will allow the closest fire engine response within proximity of an emergency to respond, providing the most “expeditious response to suppress fires and render other emergency services to the community,” Third District supervisor James Ramos said.

“With this agreement we hope to capitalize on the types of emergency services already being provided to our residents,” Ramos said. “A quicker response time in any emergency situation could be life-saving.”

The agreement will impact emergency response in the greater Barstow areas, including stretches of I-15 and I-40. The agreement only extends to mutual aid within these jurisdictional boundaries — I-15 in between Basin and Hodge roads, I-40 west of Hector Road, Highway 58 east of Hinkley Road, Highway 247 north of Slash X Cafe and also a stretch of Fort Irwin Road.

But the agreement mainly benefits the Helendale station. Mahan said MCLB firefighters generally provide assistance to his station on collisions south of Baker.

“The handicap we have in regards to response times is not exactly when we’ll get to a scene but exactly what we can do once we get to the scene,” Mahan said. “Say we have a truck fire. We have one fire engine with only 500 water gallons and two guys. There is only so much we can do. On a truck fire, ideally, it’s going to take at least a couple fire engines and a water tender or water truck. I’ve got to wait for those additional resources and I’ve got to do whatever I can until they get to the scene.”

Mahan said the station has great working relationships with the other two fire agencies and the CHP.

“We work hand in hand with local fire departments, who are huge assets to provide assistance in dealing with injuries, medical calls, car fires and things of that nature,” Camara said. “We have a great working relationship with the firefighters in Baker.”

Station 53 also works in partnership with Baker EMS, a private ambulance company in Baker, staffed with an EMT and a paramedic, Mahan said. Baker EMS is a valuable resource for the station for responding to traffic collisions, but when it comes to responding to calls involving fires, there is not much Baker EMS can offer to the station, he said.

“If there is a car crash they will come with us. So technically when we are on calls we could have four guys on scene, because since they are not part of our department there are still only two guys that can operate the Fire Department’s equipment,” Mahan said.

“Any critical crash needs two paramedics or more. Right now we just have the one from Baker EMS and he’s got to bounce around from patient to patient if needed and if he can.”