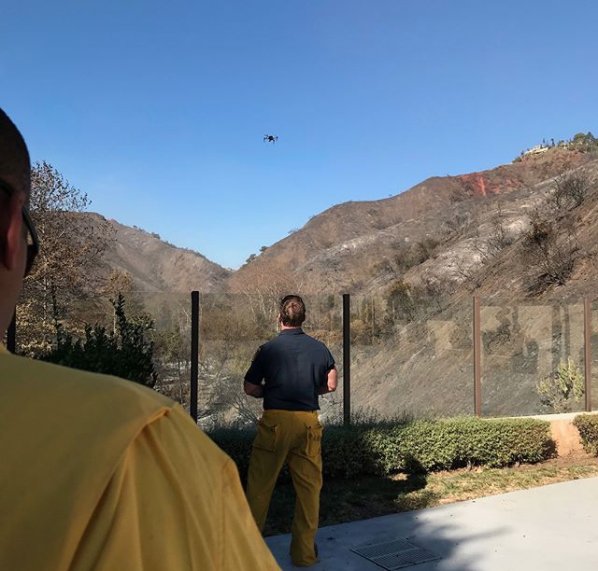 The Los Angeles Fire Department deployed its drones for the first time to survey the Skirball Fire near Bel-Air on Dec. 7, 2017.

Fire Chief Ralph Terrazas announced the move in a Thursday morning press conference, and by late afternoon two drones had conducted reconnaissance at the north end of Moraga Drive for about 30 minutes in their first official voyage, the department said.

The drones allow the department to get a birds-eye view of property damage in the fire’s aftermath and allocate resources to smoldering areas threatening to flare up, according to Terrazas. “We are very, very proud of that new technology,” he said Thursday.

The department purchased eight drones through its foundation but hadn’t used the equipment before because the Federal Aviation Administration (FAA) certified the program only two days ago, Terrazas told radio station KPCC in an interview Thursday.

One of the drones was used to get visuals of property damage while the other located hotspots, allowing firefighters or a water drop to be dispatched to the exact location where they were needed, he told the station.

The Skirball Fire was holding at 475 acres and 30 percent containment Friday afternoon and residents had begun returning to their homes, though firefighters stressed they were still monitoring hotspots that could flare up under a red flag warning in place through Sunday.

Terrazas expects the department will find additional applications for the aerial vehicles once the program moves forward.

The eight drones cost about $50,000 altogether but will replace the more expensive alternative of renting an infrared camera and flying it in a helicopter, he told KPCC.

The agency began the process of gaining FAA approval in June amid outcry from those concerned about citizen privacy, the Los Angeles Times previously reported.

All firefighters hoping to conduct the drones will need a pilot’s license, Terrazas told KPCC, but 70 firefighters have already obtained the certification.

#LAFD launched UAV #drones for the first time today in an operational environment at the #SkirballFire. The drones were airborne for approximately 30 minutes doing aerial damage assessments and checking for hotspots in an area at the north end of Moraga Drive. #advancedtechnology #wildfire