Military Exercises to Take Place in So Cal 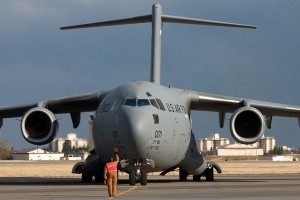 Don’t be alarmed by the sight and sound of massive military planes buzzing above the Los Alamitos area this weekend.

The U.S. Air Force Reserve, Coast Guard, Navy and Homeland Security will be simulating a joint forces response to a natural disaster as part of Operation Patriot Hook 2012.The three-day drill will run Friday through Sunday at the Los Alamitos Joint Forces Training Base, one of three Southern California bases participating in the exercise.

Huge cargo aircraft such as the C-5, C-17 and KC-135 will be loaded up with equipment such as Coast Guard boats and flown out to locales such as San Clemente Island for training. The exercise will help the forces practice massive mobilizations at speeds necessary for responding to disasters and emergencies.

These exercises will be confined to normal business hours to minimize the noise impact on surrounding neighborhoods, said officials. However, residents should be prepared for some daytime noise.

From Thursday through Sunday, “people in Los Alamitos and surrounding areas are going to see really big planes flying in the area” during the daytime, said Jessica Inigo, a California National Guard spokeswoman. “These planes are huge and are going to have a loud backdraft when they come down,” Inigo warned.

Residents may see and hear aircraft that includes C-5, C-17 and KC-135 planes. Different military branches, including the U.S. Coast Guard, will participate in the exercise.

San Clemente Island off the Orange County coastline and NAS North Island Coronado in San Diego are the other two locations the Air Force will use for the exercise.

“It’s just a great opportunity for the different services to show that if there’s a disaster, we can all come together and work together,” Inigo said Thursday.

Next week, the Seal Beach Naval Weapons Station will participate in a nationwide security exercise that could increase traffic and noise in the neighborhoods near the station Monday through Saturday.

Exercise Solid Curtain 2012 is an annual exercise at stations nationwide developed to enhance the Navy’s training and readiness in the event of an emergency.

Area residents may also experience delays in base access and gate closures at the base, and they may hear sounds from a “Giant Voice” mass notification loudspeaker system. In addition, Anaheim Bay may be partially or completely closed off to civilian boat traffic at different times through Saturday.

The 5,000-acre Seal Beach base, commissioned in 1944, is the primary weapons station supporting the U.S. Pacific Fleet.

For the latest information on access restrictions to the Naval Weapons Station, including Anaheim Bay, call the 24-hour command status line at 562-626-6000. Live updates also will be posted on the station’s Facebook page, under “Naval Weapons Station.”