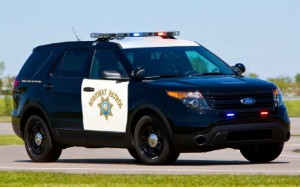 With the legendary Ford Crown Victoria-based Police Interceptor no longer in production, it’s no surprise that the California Highway Patrol (CHP) has been searching for an all-new vehicle to replenish its fleet. What is surprising is the vehicle the CHP chose — the Explorer-based Ford Police Interceptor Utility. Look for it in your rearview mirror beginning early next year.

While a win for Ford, the CHP’s selection of an SUV is a potentially troubling sign for the much-hyped cop car offerings the Detroit Three have been pitching hard to fill the void left by the departure of the Crown Vic. And there’s a good reason why: payload.

While the old-school, body-on-frame Crown Victoria may have been a rolling tank, the suitors to its throne are all modern unibodies. That may make them lighter and safer, but it doesn’t increase their carrying capacity. In fact, it seems to have lowered it, because while the Crown Vic had no trouble carrying all the CHP’s gear, the Taurus-based Police Interceptor Sedan, Dodge Charger Pursuit, and Chevrolet Caprice PPV all lack the necessary payload capacity.

The CHP insists that its cruisers be able to safely carry all their equipment plus four fully equipped officers. In all, the CHP says that can add up to roughly 1700 pounds. That’s a problem for the new crop of police sedans, because the beefiest of them, Ford’s Police Interceptor Sedan, can only carry about 1200 pounds of people and gear. Simply put, the Gross Vehicle Weight Ratings of the sedans were too low to get the job done. What’s a state trooper to do? Go big. 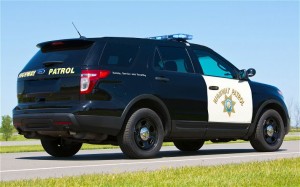 With all the sedans out of the running, it was up to the SUVs. In fact, it was only a two-vehicle race. While the CHP received a number of bids from various dealers, only the Ford Police Interceptor Utility (PI Utility) and the Chevrolet Tahoe PPV vehicles were submitted for consideration. The Dodge Durango Special Service, having arrived late to the game and without a “pursuit” rating, was not submitted. Despite using Tahoes in the past, the CHP selected the Police Interceptor Utility based on the lowest bids.

Ford says that orders for its new generation of police vehicles are currently running 60-40 in favor of the sedan, though the CHP’s planned order of 1800 PI Utility vehicles over the next two years may shift that balance. Per Ford, two of the largest markets for police vehicles in the U.S. are California and Texas, and the CHP’s decision carries some weight with other departments. The CHP says its bid process essentially clears the vehicle for use by other state departments as well, so local law enforcement and other government agencies within California will likely follow the CHP’s lead. Those other agencies, though, also have the option of purchasing the Police Interceptor Sedan. For the first time ever, the CHP split its bid into two line items, one for the sedan and one for the SUV. While the CHP will only be using the SUV (it may order a few sedans for executive vehicles), it will sign off on the sedan so that other departments can use it. Any way you slice it, it’s a big win for Ford. 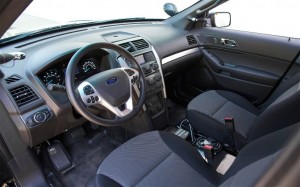 The CHP’s vehicle acquisition process, though, seems a bit convoluted. When the CHP decides to buy a new vehicle, it informs the Department of General Services (DGS), which opens a bidding process. DGS is responsible for accepting and vetting the bids and awarding a contract. Once DGS has accepted a bid, the winner must provide two test vehicles to the CHP within 14 days. In other words, the CHP doesn’t actually test the vehicles until after the bid has been awarded. Of course, to be considered in the first place, the vehicles must be pursuit rated by a trusted agency, such as the Los Angeles County Sheriff’s Department or the Michigan State Police.

Once the test vehicles are delivered, one will be fully outfitted with all the CHP’s equipment and used for radio interference testing. The other will simply have 400 pounds of weight loaded into the trunk to simulate the radio gear and will be sent out onto the CHP Academy’s test facility for dynamic testing. The CHP’s test includes standing-start acceleration, braking, and a simulated pursuit.

The CHP’s brake test is much more brutal. The test consists of a vehicle making four full ABS stops from 90 mph at two-minute intervals. The vehicle will then rest five minutes and repeat the test. An average stopping distance will be calculated from all eight stops and must not exceed 350 feet. The vehicle will also be evaluated for pulling to the left or right under braking, which could disqualify it.

The most strenuous test is the simulated pursuit. The course is four-miles long and takes roughly seven minutes, but don’t let that fool you. The test starts with three wide open throttle runs to 70 mph followed by full ABS stops from 70 mph in a row. The vehicle then immediately pulls onto a street course where it will come under hard braking 20 times. The vehicle will run through the course in one direction making a full ABS stop during a left turn followed by nine “slow and clear intersection” braking events to less than 10 mph. The vehicle will then turn around and run back through the course, this time making a full ABS stop during a right turn followed by 11 more “slow and clear intersection” events. Any brake fade observed during the test will result in a disqualification.

If any problems occur with the vehicle during testing, the bidder has 14 days to correct the issue and resubmit the vehicle for testing. If the vehicle fails again, the CHP will move on to the next bidder, in this case from the Ford to the Chevy SUV, it being the only other option.

Assuming the PI Utility passes the test, which is likely based on its performance in L.A. County Sheriff’s Office and Michigan State Police testing where it out-accelerated, out-cornered and out-braked the Tahoe, the first vehicles should be delivered to the CHP in October. From there, they’ll be sent to local shops to be outfitted with lights, sirens, and the rest. If everything goes perfectly, the first PI Utilities could hit the highway as soon as January 2013.

While clearly based on the Explorer SUV, Ford insists that the PI Utility is a purpose-built vehicle. The vehicles are fitted with heavy duty brake, cooling, and electrical systems to cope with the rigors of police work. Ford also fits a special column shifter to add room on the center console for a laptop, radio, and other gear. They even build special seats with cutouts for an officer’s utility belt. While the PI Utility is offered in front-wheel drive, the CHP requires its vehicles be rear- or all-wheel drive. Ford specs the police vehicle with its more powerful 3.7-liter V-6 rather than the standard 3.5-liter V-6, which picks up an extra 14 horsepower and 24 lb-ft of torque. A twin-turbo EcoBoost V-6, recently announced for the Explorer Sport, is not available.

So, California, you have roughly six months to learn what Ford Explorer (nee Police Interceptor Utility) headlights look like in your rearview mirror. Don’t forget what Crown Victoria headlights look like, though, because the CHP purchased 329 of them in February 2011 before their production run ended, so they’ll be on the road a while longer until the Police Interceptor Utilities are fully phased in. While you’re at it, take a good look at the Kawasaki Concours 14 ABS P motorcycle, because the CHP ordered 400 of those new bikes last year to replace the old BMW R1200 RTP.